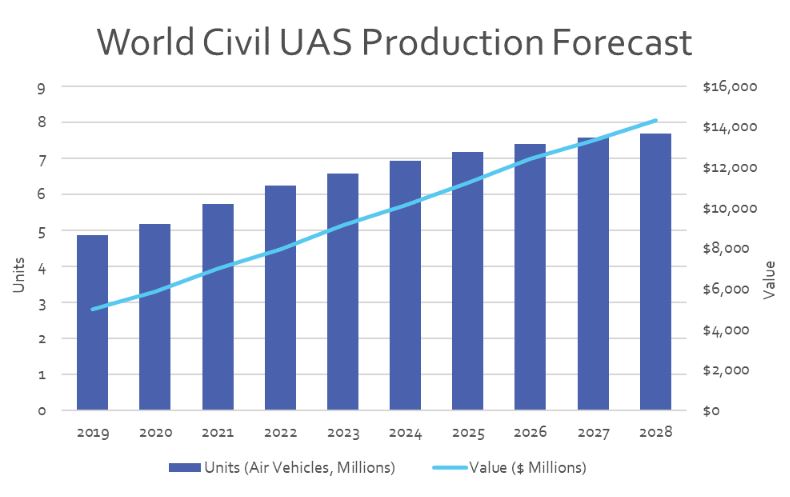 The foundations are being laid for the rapid growth of the civil UAS market. Record levels of venture capital investment and the involvement of technological giants driving research and applications are preparing the way for explosive growth as regulations worldwide are relaxed to allow easier access to airspace.

A monumental battle is shaping up as US, European and Asian companies expand to be able to compete worldwide in systems and services. The drive for scale has begun as mergers and acquisitions nationally and across borders pick up.

US companies benefit from being part of the world’s commercial drone market with strong access to venture capital.

Yet China is seeking to expand from dominance in consumer UAS manufacturing to leadership in commercial UAS. Government and industry are working together to build their country’s market presence.

Despite vocal support from the Japanese government, Japan is falling behind China. Yet some Japanese UAS companies are working to rapidly expand a multinational presence and introduce drone services into Japan itself.

Europe is working to avoid being left behind by moving toward standardized airspace rules.

The market itself is promising. In terms of aerospace, the market for civil UAS promises to be one of the most dynamic growth sectors for the next decade, emerging from a $5 billion annual market in 2019 to almost triple to $14.5 billion by 2028. That represents a 12.5% compound annual growth rate in constant dollars. Over the next 10 years the market totals $97.6 billion.

Although consumer systems represent slightly over 55% of the over-all market through the decade, the fastest growth comes from commercial systems, which surpass consumer systems by annual value in 2023 and continue to widen the lead throughout the rest of the forecast period.

After years of delays, civil government in the United States and Europe is getting serious about deployment of UAS. Civil government drone spending promises to benefit from growing concerns about border and maritime security in the United States and Europe. Peacekeeping operations for United Nations and other countries will further boost sales. In addition, public safety use for law enforcement and fire control is growing.

The US Coast Guard and the European Maritime Safety Agency are now purchasing UAS services and planning is underway for broader deployment of systems. The US Customs and Border Protection Agency has introduced a pilot program in small UAS. Public safety deployment of drones in the United States is soaring.

Commercial markets are beginning to develop. Many companies are currently doing proof of concept work that creates the foundations for widespread deployment of drones. They are working to prove cost savings and make sure data provided can be integrated into the business’ workflow.

Construction, insurance and energy promise to grow quickly in coming years. Large enterprises will de-ploy fleets of systems. Agriculture, which is currently the largest market thanks to the value of unmanned spraying systems, will grow more slowly due to the currently depressed profitability of the sector and the diffuse nature of decision-making. Delivery eventually promises to be a very large market but will develop first in narrow niches such as delivery to very remote areas such as is-lands or ships or delivery of high-value, time-sensitive products such as medical supplies.

As the commercial market develops, it mostly will be based on inexpensive prosumer and mini UAVs and will be much more price sensitive than the governmental market. Even local law enforcement agencies will be buying mainly prosumer and inexpensive mini-systems rather than much costlier larger UAVs.

While the unit numbers of these UAVs purchased to serve the commercial market promise to be substantial, their value will be a small fraction of that of the costly, sophisticated systems that dominate the military market such as Global Hawk and Predator.

Consumer UAS will continue to grow but its most explosive growth is behind it. It is a much more mature market that has lost some of its novelty and technological innovations that will attract buyers are becoming fewer. Still, the market will continue to expand thanks to new technological developments and a wider range of product offerings.

Phil is Director of Corporate Analysis at Teal Group. He has provided strategic and market analysis for clients in commercial aerospace and defense, including major U.S. and European prime contractors, since joining Teal fifteen years ago.

He also writes and edits Teal's Defense and Aerospace Companies Briefing, which analyzes the performance, outlook and strategies of 50 aerospace and defense companies in the United States, Europe, Asia and South America. He is a co-author of the annual World Unmanned Aerial Vehicle Systems with responsibility for UAV companies.